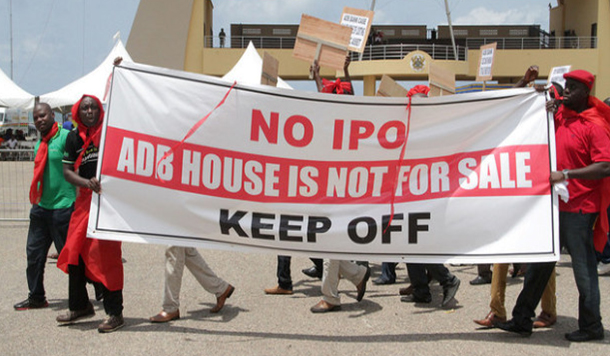 The Union of Industry, Commerce and Finance Workers Union, UNICOF is confident hearing of its court cases against ADB’s Initial Public Offering, IPO, would begin before the share sale ends.

The union has filed a suit at the High Court seeking an injunction on the IPO and another suit at the Supreme Court challenging the legality of the management’s decision to go ahead with the exercise without parliamentary approval.

This is coming after The Minority in Parliament also filed a suit at the Supreme Court accusing ADB of breaching provisions of Article 181 which requires all international agreements to be approved by parliament.

The lawyer for UNICOF, Charles Bawaduah outlined why they are in court:

“The bank as it were has signed two agreements with two foreign companies – ATLAS MARA Ltd. and Norwegian Fund for Developing Countries. And by this agreement the bank will give 25% and 15% respectively to ATLAS MARA and NORFINANCE. This agreement is our contention. It’s an international agreement and is a matter that ought to have come before Parliament of Ghana for approval and we are also saying that the decision alone to even issue shares at the Ghana Stock Exchange without seeking parliamentary approval contravenes the existing law.

“Apart from that we are also saying that as a union, we have been certified by the chief labour officer per the Labour Act of 2003 to negotiate matters affecting our members, affecting the workers of ADB, so management cannot unilaterally, and without recourse to any negotiation decide to launch the IPO without dealing with the issues we have raised and which affect our members,” he said
There are however suggestions the action may not achieve its purpose as the case may be called only after the end of the IPO, which was launched last Friday. But Mr. Bawaduah insist they are doing everything possible to avert such an occurrence.

“These matters will normally take time. We have filed a writ at the Supreme Court. We will file a Statement of Case for which they will respond to and then the Registry of the Supreme Court will fix a date for hearing. So at the moment, we cannot say much about the writ. We have served the requisite processes. The rules of court ought to be followed before a date is set for hearing.

“In the course of dealing with such applications to make sure that at the time these matters are heard, they will not render our processes innovatory but I am sure those ones will be dealt with. I am confident that the cases will surely have the effects for which they have been brought” he said.